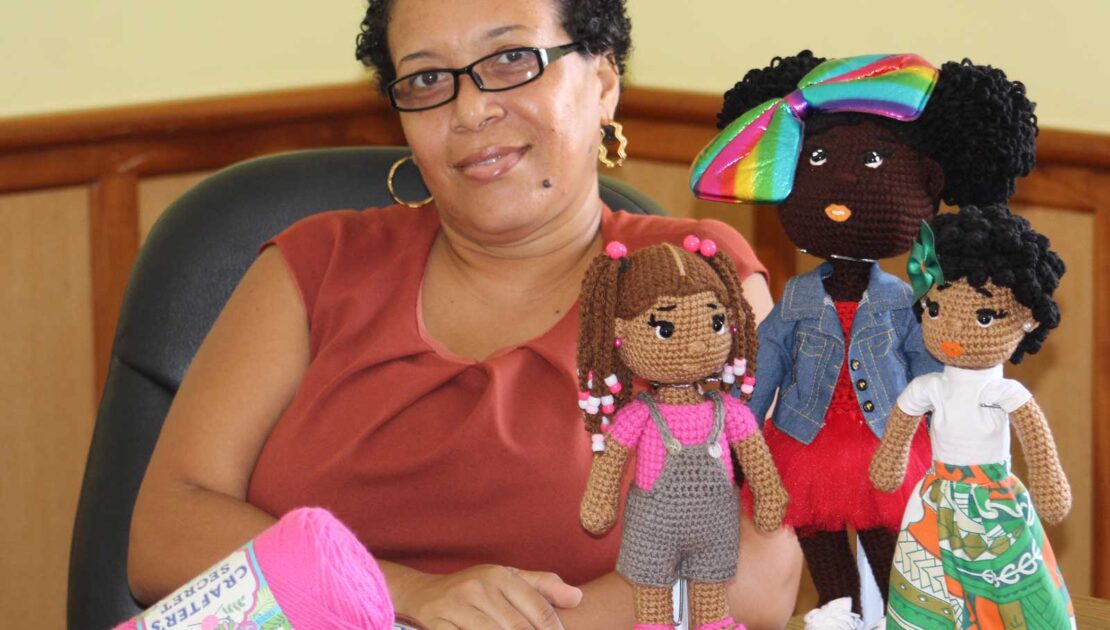 At the tender age of nine years old, mother-of-four Shevonne de Shong began honing her skills in crochet and knitting – guided by her own mother, who recognized her interest in the art. However, it wasn’t until 2016 that Shevonne got the motivation to turn her talent into a fully-fledged business.

That year, Shevonne gave birth to her last daughter, Khloe, and had an idea that would subsequently bring her dormant crochet and knitting skills back to life!

“I wanted those fancy crocheted blankets and matching hats and booties, but I wasn’t finding them anywhere,” she recalled. “So, I said let me use my own skills to whip up some stuff.”

After that initial start, the knitting bug got the best of her and she began to make even more clothing for Khloe – eventually taking photographs of her daughter in the outfits so she could share on her Instagram page. Those photos started gaining popularity and caught the attention of several ‘influencer’ accounts, who contacted her for permission to feature said photos on their own social media pages.

Additionally, Shevonne had joined several mothers’ groups on Facebook, and was also posting Khloe’s photos on those forums. It wasn’t long before people were contacting her on both Instagram and Facebook, wanting cute crocheted and knitted clothing for their own children.

And so, Khloe’s Krochet was born!

Earlier this year, a friend of Shevonne’s advised her to register her business with Invest SVG, as she was very impressed with the quality of products created under Khloe’s Krochet. Soon after registering, she received an email notifying her of the launch of the PRYME (Promoting Youth Micro Enterprise) Grant; which piqued her interest, until she realized it was specifically for persons aged 18 – 40.

“I was a bit disappointed that I wasn’t eligible. However, about a month later, I heard the Prime Minister talking about PRYME Plus [extended to those over 40] and I got excited!”

Shevonne immediately contacted Invest SVG for guidance in applying, and also received assistance from the Centre for Enterprise Development regarding drafting her business plan to submit to the PRYME Implementation Unit. Some time after, the PRYME Unit called to inform her that she had been successful.

“I was so excited because I knew how much that money could do for my business in expanding on the services I offer,” she enthused.

Shevonne added: “I’m so grateful that I got through because me approaching a bank with a business like this, I don’t think they see this as something sustainable – they see it as a hobby. So, for me to be getting this opportunity, it’s really a boost!”

In addition to designing crocheted/knitted clothing for children (and sometimes adults), the Khloe’s Krochet founder/owner also makes a line of dolls called Khloe’s Dolls – ranging in size and skin tone.

“I want children to be able to have dolls in their skin complexion, with their texture and style of hair,” she explained about the dolls, which have become her most popular product.

Shevonne also shared that most of her dolls were exported to the US, Canada and the UK. Unfortunately, with the onset of the COVID-19 pandemic, she was unable to fulfill as many overseas orders because of the unreliability of those countries’ postal systems.

However, orders for her Khloe dolls began increasing locally after a customer, who makes cakes and other baked goods, began “showing off” the items she had purchased from Shevonne to her own client base.

“Within that week alone, I got ten new orders, and it has steadily increased since then!”

Shevonne continues to be proactive in her business approach; she has been extensively researching ways to increase production of her Khloe dolls and the expansion of the range of services she offers. A portion of her PRYME grant has gone toward purchasing equipment to accessorise clothing and other items (embroidery, heat / vinyl transfers etc.) – with a focus on offering personalized designs.

She is also exploring the possibility of venturing into direct-to-garment (DTG) printing, which would allow her to cater to corporate clientele.

“I see my business taking off to the point where I am going to have to hire persons and train them. The field I’m into will always be in demand because there will always be birthdays, weddings and other special occasions.”

Enthusiastic about the future of her business, Shevonne urged other entrepreneurs to apply for the PRYME grant because they have “nothing to lose and everything to gain”. She also highlighted the need for entrepreneurs to believe in themselves and their products/services, and to do everything in their power to ensure success.

“Expand on what you’re doing – try to be different.”

Shevonne also encouraged businesses to register with Invest SVG, as the agency regularly informs its database about a variety of initiatives and projects from local, regional and international agencies.

In addition to being a PRYME recipient, Shevonne was also selected by Invest SVG to have her Khloe’s Krochet products showcased at the St. Vincent and the Grenadines booth in Dubai for Expo 2020 (postponed to October 2021 due to the covid-19 pandemic) – something she is greatly anticipating.

“With Invest SVG, I always get all kinds of emails about whatever opportunities are available, so I would urge entrepreneurs – especially young entrepreneurs – to sign up!”

Saint Vincent And The Grenadines Celebra...

Business in St. Vincent & the Grenadines

The teams focused their efforts on a few of the highest-value S&OP levers in order to review the current plann...

Developing a strategy and roadmap for cl...

Pharm Ltd. leadership turned to Pear Business to help ensure that the core elements of their supply chain were...

Management of generation changes in busi...

The world is always changing and we are all part of it. Yesterday’s unimaginable things are possible today.

Cabinet (Government) has appointed a Board of Directors to preside over Invest SVG; with members drawn from the public and private sectors. The Board is responsible for policy guidance, strategic planning and ensuring the accountability of the Executive Director.

Українська
Manage Cookie Consent
To provide the best experiences, we use technologies like cookies to store and/or access device information. Consenting to these technologies will allow us to process data such as browsing behavior or unique IDs on this site. Not consenting or withdrawing consent, may adversely affect certain features and functions.
Manage options Manage services Manage vendors Read more about these purposes
View preferences
{title} {title} {title}